After serving in the United States Air Force, Dwight began his career in hospitality at the Ritz-Carlton. He worked in several departments with the Four Seasons, the Rosewood Hotels and Resorts, and the Luxury Collection (Marriott). Dwight has a passion for creating memorable guest experiences, and grooming employees for success.

During his 20 plus years in the hospitality industry, his travels have taken him from Atlanta to Vancouver, the British Virgin Islands (Virgin Gorda) to Vermont and now, Maine. Dwight enjoys New England culture and the laid-back vibe, yet unwavering expectations for service of those who travel from afar, seeking to unplug on the Maine coast. “I look forward to meeting the guests and families who vacation to Linekin Bay Resort year after year,” says Dwight. “It’s evident that this slice of Maine holds special memories for families, and groups from around the world, and I’m eager to help start new traditions for first-timers to Linekin Bay Resort.”

Dwight and his wife, Aysegul, are excited to call Boothbay Harbor their new home. Garry moved to Maine in 1990 and has been a Boothbay Harbor resident ever since. “Boothbay Harbor has been a wonderful home and welcomed me with open arms,” he recalls. “This charming fishing village has so much to offer travelers from afar, and those who decide to stay for a lifetime.” 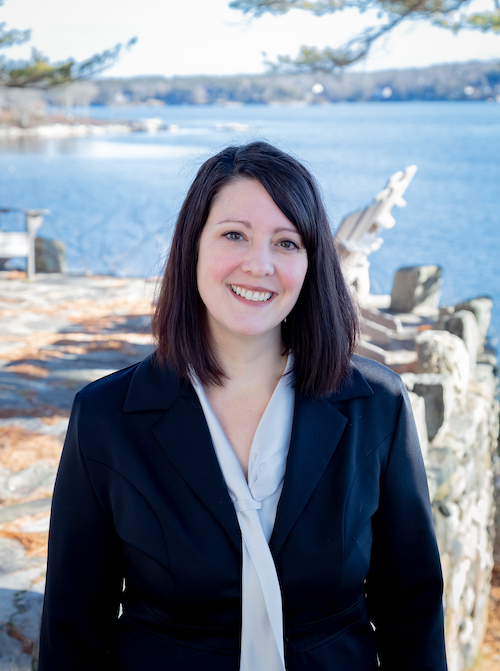 Although she grew up in Connecticut, “Linekin Bay Resort feels like home” says Melissa, who spent summers across the bay in her parents’ log cabin and at Sprucewold Beach. After graduating from Trinity College with a degree in Psychology and Theater/Dance, Melissa moved to Maine to marry the love of her life, Jason.

Melissa ran the Boothbay Region YMCA Dance Program for many years and fulfilled her creativity for beautiful fabrics at a local fabric store, as well as her own at home sewing business. Melissa fell in love with Linekin Bay Resort when working as an Event Server for two seasons, and she decided it was time for a career change. With her knowledge of the property and surrounding area, making a career shift to the role of Event Coordinator in 2018 was a natural fit for both Melissa and Linekin Bay Resort. “I am continually amazed by the similarities of directing a show and planning an event, as there is a myriad of details to organize, including timelines, space preparation, and making sure people are where they’re supposed to be for their entrance,” Melissa says. Her event staff continues to get a good chuckle at every event when she says, “It’s show time”, and insists on calling the kitchen “backstage”!

Melissa and her husband, Jason, are raising their three teenage daughters in Boothbay Harbor, and loving life by the ocean! Chef Jonathan began at Linekin Bay Resort in 1995 and worked for 14 seasons on and off through 2012. He then returned to Linekin Bay Resort in 2017 as the executive chef. Chef Jonathan comes with 31+ years of experience in various establishments ranging from hotels to private clubs and some of Portland, Maine’s best restaurants. He graduated from Johnson & Wales University located in Providence, Rhode Island.

“I love the beauty of Linekin Bay. I’ve been fortunate to work with staff from all over the world and it’s always interesting to meet new people, especially students traveling from abroad on a student visa,” Chef Jonathan says. He lives in Freeport, Maine and traditionally travels during the off-season to Puerto Rico, but he says “I’ve kept close to home this past year enjoying everything that Maine has to offer. I’m always excited for the beginning of another season!” Mary Montgomery Koppel joined the Linekin Bay Resort team during the 2021 season. She grew up in nearby Woolwich, boating on the Kennebec and the Sasanoa rivers; she also spent time lobstering with her father and sister. Mary put herself through college and graduate school working on waterfronts in the Midcoast Maine area, first as a launchtender at Sebasco Harbor Resort and then as the Head Steward at the Boothbay Harbor Yacht Club.

When not on the water, Mary has built a career as a composer, soprano, and professor of music in the Boston area. She is currently a professor at Gordon College, and teaches at Boston University as well. As satisfying as her life in the arts and academia are, her love of the ocean has called her back to working on the water. For several years, she has vacationed at Linekin Bay Resort with her husband and two sons. She says “When the opportunity arose for me to join the team and spend an entire summer at LBR, I couldn’t pass it up. I get to help people enjoy time on the water – there is nothing better!”